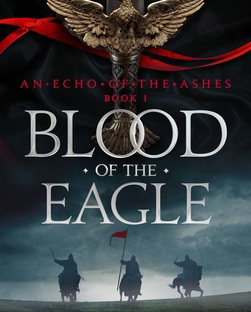 I digressed from my usual book type to read this one. I admit, it took a bit to get into the high fantasy genre … and it was a worthwhile diversion!

Blood of the Eagle by Anthony Kearle is a high fantasy novel following multiple key characters from diverse lands, each with distinct customs and beliefs.

A map lays out the invented world: the Valkir Isles’ raiders are clearly inspired by Vikings, the fiercest of which are ‘bloodsworn’ and bear the tattoos to prove it; Medea’s ‘sellsword’ mercenaries ‘fight for coin’; Odrysia’s knights of the Order of Kil’kara share similarities with the Crusaders in their fight for their faith. The varying societies are well-depicted. People’s origins are recognisable by their skin colour and overall appearance, manner of speech and mother tongue, as well as by the colour of their war paint designating alignment to particular tribes.

The compelling plot features different quests which intersect. In keeping with the genre, tracking the changing allegiances of kingdoms and tribes­ – complicated by historical allegiances – demands audience attention at all times. The effective structure sees each chapter following one troupe, jump-cutting to other perspectives within an event, before moving to the next chapter with another party.

Excitement builds as protagonists travel from their homelands into foreign places with unfamiliar customs, overlayed with fear of entering potential enemy territory. Not everyone is who they seem: who can be trusted as allies?

The novel’s epic story features some unpredictable twists and turns. Elaboration of an immense variety of weapons and blow-by-blow battle scenes are not for the squeamish: these fights are to the death, the combatants loyal to individual causes and protected by individual gods. Spoiler alert: some of the protagonists the audience grows fond of die. There is simply too much battle for them all to survive. Rest easy, though, as their fight is noble so their resting place is their various versions of heaven – and with armies in the hundreds there are always warriors to replace them in the good fight. After all, it is ‘on the doorway between life and death’ that they feel ‘most alive’. As in any worthwhile fantasy there is also magic, with ancient legends referencing more than one mythical creature.

The plot is marred by grammatical errors and clunky expression, hindering fluency. Kearle is a neophyte writer still developing his craft: his future books may contain more diverse word choice, and characters more idiosyncratic in their feelings and motives with their own voices more clearly developed. Current uniformity is countered by lovely phrases (‘the bow sang’ as the arrow was released) and descriptions, particularly when riders’ senses are heightened upon entry into territories not held by own kin and therefore dangerous.

The enticing cover of this first instalment of the An Echo of the Ashes series is highly attractive. There is clear set-up for expansion of narrative and character arcs in the next books of the series. Blood of the Eagle will appeal to lovers of the fantasy genre, especially to readers who thrive on multi-faceted storylines.

Look out for the second book in the series, “Shadow of the Nightingale”, out soon!

I am the author of "Journey into the Dark and the Light". My book features poems and accompanying pictures, depicting my journey of recovery from depression. View all posts by annabelharz